Hands up those who have had an argument about the thermostat on the central heating? Come on, be honest! I know I have and it resulted in me moving 1500 miles to Portugal to avoid the frosty climate, both inside the house and outside! Well actually we both moved here, but I was going for a dramatic opening to this blog about perceived or apparent temperatures. Read on to the end to get my top tips for surviving the unexpected cold snaps. 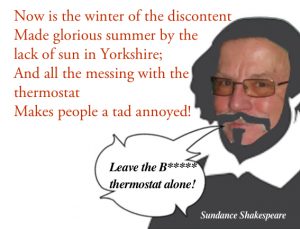 I was sat outside the local bar with a group of expat acquaintances and we were bemoaning the fact that it was cold, the temperature having gone down to 18 degrees! Admittedly I was wearing shorts and a ‘T’ shirt but I thought of myself as a ‘roughtie toughtie’ northerner, (north of England) and so used to lower temperatures. I remembered when we first moved to Portugal three years ago, I was struck by how wrapped up the locals were and particularly some of the expats, in 20-22 degrees. But now I was succumbing to the same ‘southern softness’, or so I thought. This was a serious situation, so I decided to investigate and turned up some interesting information, myths and a possible reason for feeling cold…

According to Dr Sweiss of the University of Chicago’s Cold Hands Clinic (cool name!), a recent development of sensitivity to cold could be a sign of significant medical issues, including thyroid diseases. However, there are simpler reasons that we all know or suspect; thinner people get colder than heavier people, older rather than younger individuals. Some surprising ones; married women generally handle the cold better! I always  thought it was mainly men that had to handle cold shoulders… 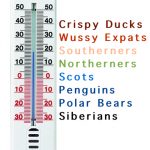 One of the myths about apparent temperature involves the concept of developing ‘thinner’ blood. Medical evidence suggests it is more likely due to a person’s tolerance to the cold weather changing, or perhaps to a loss of some “insulating” fat due.

The perception of cold begins when nerves in the skin send impulses to the brain about skin temperature. These impulses respond not only to the temperature of the skin, but also to the rate of change in skin temperature. Impulses arriving at the cerebral cortex, the part of the brain where reasoning occurs, generate information about how cold we feel. These combine with impulses arriving from the limbic system, responsible for our emotional state, to determine how miserably cold we feel. These feelings motivate us to perform certain behaviours, such as putting on more clothes, complaining about the weather, arguing about the thermostat!

Now some of us also may feel cold simply because of how others close to us look or are behaving, a phenomenon called “cold contagion”. It’s a bit like yawning – ever notice how they spread when someone starts yawning?  In one medical study, healthy volunteers felt colder if they were shown videos of actors pretending to be cold, than if the actors pretended to be warm. Now I can relate to this, remember me sitting outside the bar? Well one of the guys was continually complaining about the cold I was soon shivering and yawning!

FOOTNOTE: Most of us who are healthy but claim to feel cold may only have ourselves to blame. In today’s world, we rarely expose ourselves to cold. Instead, we spend money on expensive clothing to protect us from the lower temperatures and spend huge amounts warming our living and working spaces. This in turn may actually contribute to obesity as we are not using as much energy ‘stoking’ ourselves up. We’d probably all be much better off if we spent more time sitting outside the bar and being cold. But it might be a good idea to get some new friends who don’t continually complain about the weather! 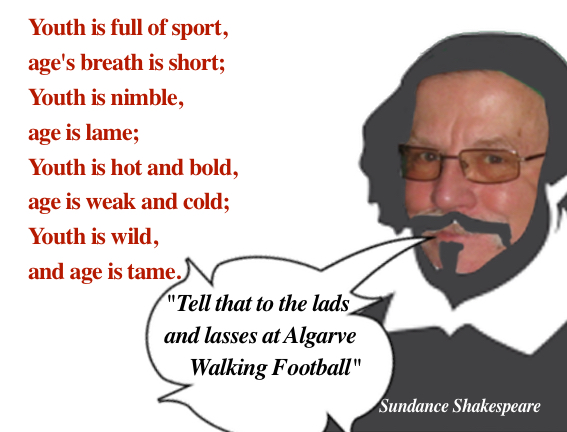 And here’s the evidence – some of the action from the Algarve Walking Football Cup at Brown’s Leisure Centre, Vilamoura. Teams are made up of over 50’s men and women. (Well some teams were!)