Her Outdoors and myself have become racists. Well at least anti Gypsy. Well, more specifically anti the family who camped in the field next to our house! We didn’t want to become anti Gypsy and have spent a lot of our adult life challenging other people’s attitudes to different cultures. For me, my abhorrence of racism stems from being brought up in a family with an Irish Catholic background in 1950’s England and the prejudices that prevailed at that time. For ‘Her Outdoors’ it’s because she is such a lovely, accepting woman who abhors prejudice of any kind, to anyone.

Her Outdoors and myself like travelling and have occasionally enjoyed the ‘Gypsy’ lifestyle. (Our longest trip in the motorhome was for six months) We enjoyed meeting fellow ‘silver surfers’ although many of them were appalled at me describing them as ‘Travellers’. “So, you are living in your motorhome, wandering around Europe and are not working, but you wouldn’t describe yourselves as… “.

So, we were making our way back to our home in Portugal having been back to the UK to visit our families, then on to France visiting French friends, before meandering our way back through the Pyrenees and Spain. We intended to take 3/4 days for the last leg through Spain, but got a call from a friend telling us someone had broken into our garage. “Oh dear” we thought, “at least there isn’t much in the garage”. Except our two motorbikes, four bicycles some building materials and all my DIY tools. But we were not too dismayed; at least they didn’t get into the house.

Shortly after, we got another call from our friend, saying they had also broken into the house! The burglars had apparently pulled the doors closed when they left, so it looked secure. Our “Oh dear” was replaced with “Oh b******s””. At which point we decided the leisurely drive through Spain should be curtailed by pressing a firmer foot on the accelerator.

We managed to get home by late evening. For any Spanish or Portuguese police that may be monitoring our blogs, we assure you that no speed limits were exceeded. And anyway, our campervan isn’t capable of the120 mph motorway limit…

Strangely, by the time we got home we were quite philosophical about the situation. We’d had several hours to digest the news and so were not overly shocked or upset at the scene of devastation. (Actually there was only my office that had been ransacked but I’m trying to elicit a sympathetic audience response here.)

We started cataloguing missing items, as the GNR (local police) were expected and we thought they would be interested in what had been stolen. TV, DVD player and remote controls, two old laptops, a computer monitor, video tripod and sound recorder, video lights, a washer (for laundry, that is, not as in nuts, bolts and…) The list got longer and longer. But we noted items that had been left; microwave, kettle, and toaster. At this point ‘Her Outdoors’ got irate. “What’s wrong with our British goods?” she wailed. Actually it was more of a contemptuous statement (I’m trying to elicit sympathy again).

The GNR duly arrived as we’d arranged. “Por favor Senor, how did you manage to drive through Spain and Portugal so quickly?” wasn’t asked, but they went about their business poking around looking for fingerprints. But it seemed just a cursory poke. There was no evidence of them having honed their investigative skills by watching any of the CSI programmes. There was no brushing on of face powder or whatever they use, no taking samples for DNA analysis. No criminal profiling. (See my own CSI profiling at the end of this blog.) We were deflated, although not quite as deflated as my bike tyres that I can’t pump up until I replace the stolen pump! (Added to list!)

The immediate problem we had was the doors and how to secure them overnight. Because of the layout to our Quinta, we have three doors on our terrace that give access to various rooms. They broke through all three (as well as the garage). One room is my office, which we decided to leave unlocked overnight, partly hoping that the burglars would come back to tidy up. The office is next to our utility/larder from which they took our beers, wines and other less precious items such as bottled water and large bottles of our homegrown olives, which were curing. Fortunately they didn’t take our stash of marmite! The door to the main house was barricaded inside with heavy furniture. We were concerned they might come back for the kettle and toaster.

The next day I had to go to the GNR to make a formal report. What a horrible experience that was. It started with me apologising that I don’t speak Portuguese and asking if they spoke English. “NO, ONLY PORTUGUESE!” came the response from a rather arrogant young GNR. Eventually, a translator was summoned and a report was written with a list of stolen items and values. The arrogant one’s single finger typing took some time. I started to feel like I was the criminal, confessing my crimes.

Report writing was punctuated by quizzical looks and wry smiles between the arrogant one and the friendlier translator. The olives obviously resonated with them. The report writing was also punctuated by other officers coming through the office to say hello to the arrogant one and tell him about their previous night out. Or so I thought. Eu náo falo Portuguese, remember.

The burglary has elicited a real rollercoaster of emotions. From the initial shock of the news, to the anger of ‘how dare they’! There was the petty annoyance when finding a ball of string had gone, to the huge inconvenience of changing passwords and setting up a process to wipe my old computer, if it came online. But then we had a lovely surprise when tidying up to find 2 packets of chocolate eclairs. (My family hide them for us to find after their visits. I know that as a parent I should be the one hiding for the kids, but it’s a lovely tradition, which they should keep up!)

Life has got back to normal now. Her Outdoors is spending even more time outdoors. She’s not quite gardening with her head torch on yet, but she is finding it difficult to find her way back to the house in the dark, ever since the solar powered fairy lights disappeared. Bugger! Another one for the list! I wonder if I could type that one myself? 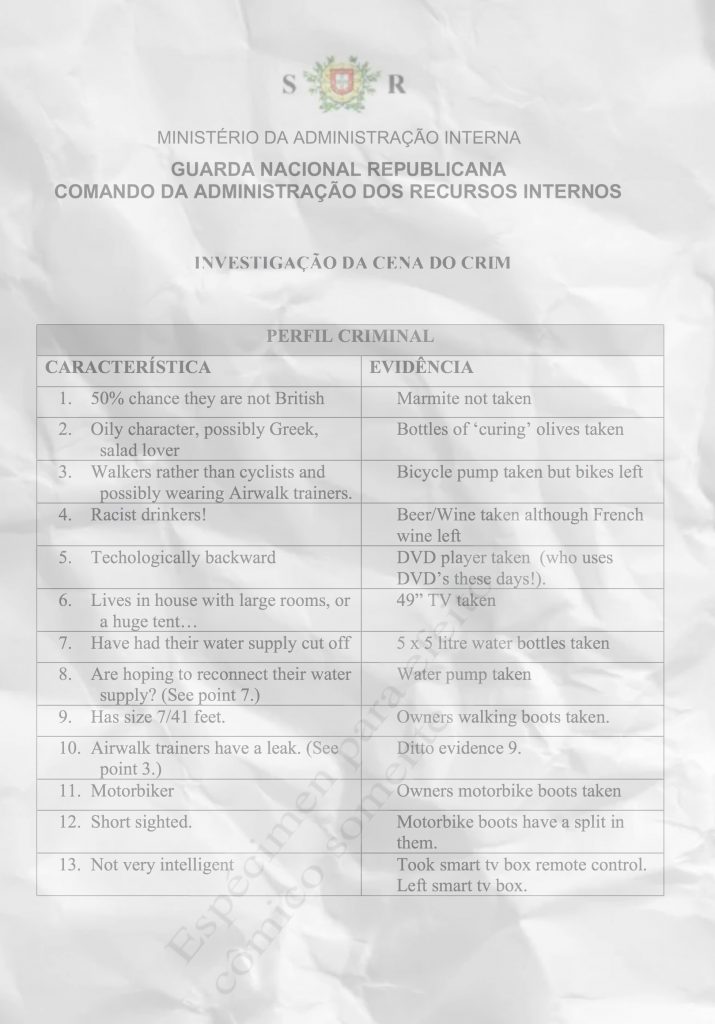